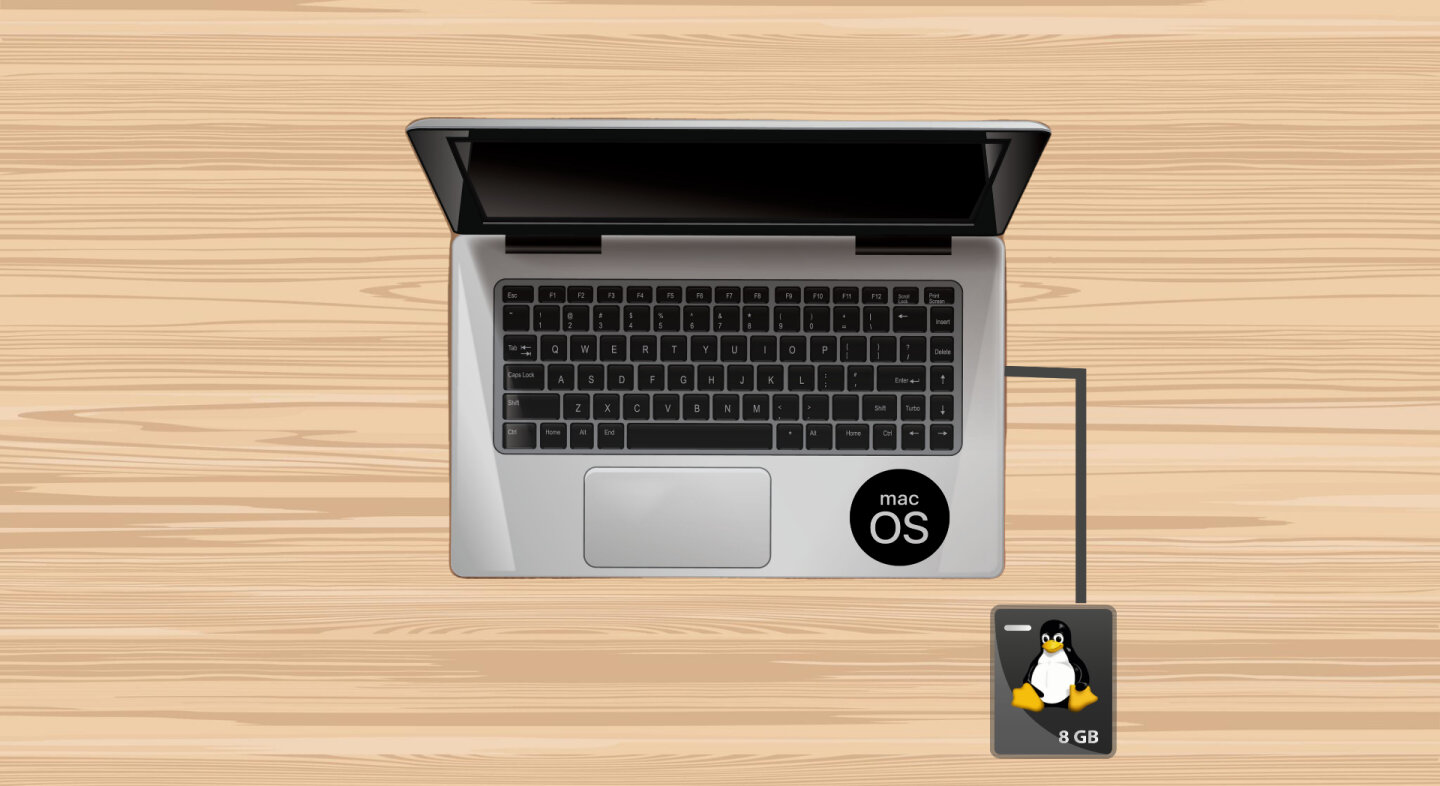 Run Ubuntu 20.04 in an external SSD drive in a MacBook Pro

I spent some time installing Ubuntu on a MacBook Pro, only to decide to step back when I had almost everything ready. The reasons were:

☹️ Bad luck… I’ll need another way to work on a Linux box. You can read the full story below.

This is what I used:

Which computer should I use?

I had two computers I could use to install Linux:

At first, I tried to install it in the MacBook Pro 16’ from 2019. It’s my main computer right now, and a very powerful one. Unfortunately, after doing some research, I found out this gist which describes all the things that work and, more important, all those that doesn’t. Not having Wi-Fi is a problem, I need to move around with the laptop (that’s what a laptop is meant for, anyway) so I don’t want to go from here to there with a network cable following me around everywhere. Also, after reading the gist I came to the conclusion that making it work seemed like a good side-project to learn a few things, but that’s not what I’m looking for. I want a Linux computer up and running in as fast as possible and, this is very important, I need to be able to work on that computer.

Finally, I decided to use Ubuntu Desktop. Why? I already knew it and had support for almost all the hardware, so I thought it would be the most effective distribution to use.

To prepepare everything for the installation, I will use the MacBook Pro 13’ from 2015 running the latest version of macOS Big Sur.

Plug in the USB Stick and open the Disk Utility application. On the left-hand pane, look for the USB Stick drive and follow the next steps: 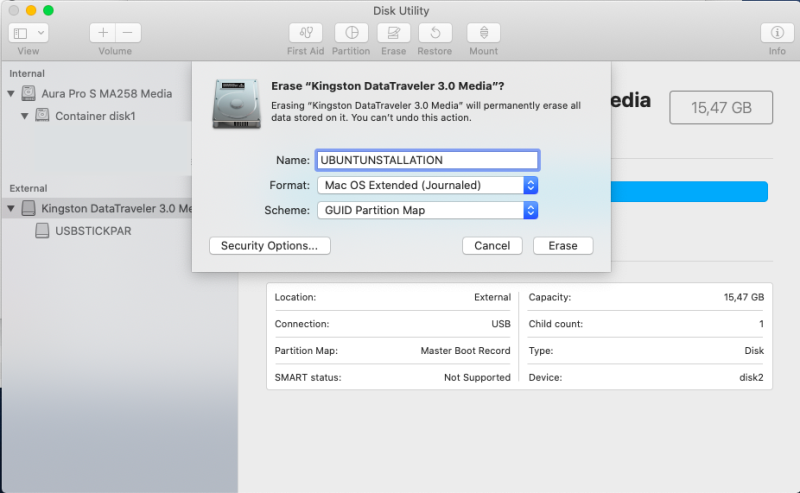 This will erase the drive, create an empty file system, and create the partition table that we need to boot from the USB drive.

Once we have the partition table in place, we will “burn” the Ubuntu ISO image into the USB stick. Go to the Ubuntu Desktop download page and get the latest version of the ISO image. We will save it as ~/Downloads/ubuntu.iso.

To “burn” it, we will use the terminal and a bunch of commands.

Find out the device name of the USB Stick

Looking at the output of the diskutil command, we can get the name of the device we are looking for: /dev/disk2. We will unmount it before we continue:

Before “burning” the image, we need to convert the file that we downloaded from the ISO to the IMG format. We will use the hdiutil command to do that:

Once we have the image in the IMG format, we can “burn” it to the USB Stick using the dd command:

⚠ When we run this command, we should make sure that we are using the correct device name. Be careful, because if you use the wrong device you might end up corrupting your system disk and loosing data. ⚠

Keep you USB stick plugged in and turn off the MacBook Pro. We plug in the SSD External drive in which we want to install our Linux Desktop. Restart your computer and remember to press the ALT key while the computer starts. When you are asked, select to boot from the USB device. This will boot the Ubuntu installer.

We will not go into the details of the installation process since we just performed a standard installation. We did nothing fancy here. As a reminder for myself, I’ll only mention that during the installation, we selected the following options:

After the installation finishes, turn off the computer and unplug the USB stick. Start it, and once again
remember to press the ALT key. When you are asked, select the external USB Drive and let Ubuntu desktop start.

Congratulations! We have Ubuntu running in our MacBook Pro. Let’s install all the software we need to do our job.

Step 3: Preparation for running the playbook

Having reached this point, we need to do two things:

Instead of doing it manually, we created an Ansible playbook to do it for us. But to be able to run the playbook, we need to install several packages before.

Install pip3 and other system packages

Since our playbook uses curl, we also need to install it:

Our playbook uses the apt ansible module. This module depends on another python module called python-apt. Unfortunately, this module is not kept up-to-date pypi and if you try to python-apt it using pip3, the installation fails (more info in this comment in github)

We need to install the module python-apt from somewhere else… Let’s do it!

We are ready to install Ansible. We will install it inside a virtual environment, so we can have multiple Ansible versions available in our computer. The playbook that we want to run uses ansible 2.10, so let’s go:

Enter the password to become root and let the playbook run. It will do the following:

After it finishes, we can say that we are done: Congratulations! We have a fully functional working Ubuntu Desktop running on our MacBook Pro from 2015.

Once everything is installed, we can start working. And with working I mean do my job: run Ansible playbooks, open websites, check my email, look at my calendar, access files in the cloud, attend to video calls… This is what we found out when we started using the computer to do actual work:

After trying to fix the issues for a few hours, I decided to step back and don’t use Linux in this computer. The main reason was the way the fans were working: I don’t want to damage any component of the computer due to lack of proper cooling. Also, the issue with the microphone was critical, because without a working microphone, I can’t attend to online meetings. I also tried and external USB audio card but had the same problem with it. I have the feeling that it’s something to do with the configuration of pulse, but I couldn’t find out what was it.

I was able to install and run Ubuntu 20.04 in the MacBook Pro 13’ from 2015. The installation of all the software and hardware drivers was easy. It was a productive exercise for me, since it’s been a long, long time since the last time I had to compile and install drivers for the Linux Kernel. I’ve also learned about snap and flatpak, two ways of distributing software for Linux that were new to me… I’m used to the good-old package managers like apt or yum.

Unfortunately, a few things made me step back:

What do I mean with step back? It means that I will not use this computer to work under the Linux operating system. I need to find another way 🤔 Stay tuned!